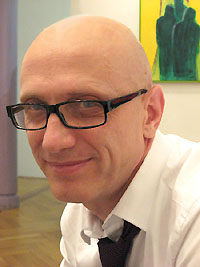 I was born in Budapest, early 1958. Half a year later the family came back to then-USSR, and I spent most of my childhood in different community towns (my father was a military) nearby Moscow. I’ve liked drawing since ever I remember myself. In my childhood I wasn’t trained somehow professionally. But in 1978 I was enrolled to the preparative course at Moscow Padagogical University, Fine Arts & Graphic Department. I also started taking individual lessons from a professional artist. My first teacher was Dibir Izrailov, who taught me drawing & painting. But more than that, he helped me to form the attitude to Fine Arts. So, he gave me the first impulse and set the direction to my future development. Another important meeting was that with Mikhail Rudakov. He never taught me, and I didn’t meet him but once in his studio. But the impression made by his paintings and personality is hard to underrate.

My first exhibition happened in 1985, soon after the graduation. My friends and I formed and association “Painter-Tourist”, a name mysterious even for us, and organized an exhibition in one of Moscow art halls. Since then I take part in various exhibitions quite regularly. Here’s the full list of them →

I started to teach drawing & painting right after the graduation. But it was not much of a story until I found that studio on Baumanskaya St. It belonged to leisure & education center for kids and grownups, and the job of drawing & painting teacher was vacant. So, that’s how the story of Baumanskaya School of Painting began. These years of teaching resulted in creating a personal approach, some methods & tools, often unique, in writing several manuals (teaching books) and developing several educational programs. For more related information →

As for the painting itself, in my early creative years I quite sincerely worked in realistic style. I was bewitched (charmed) by the mystery of the whole worlds being created or re-created on a canvas plane. But then I reached a saturation point. It turned into a crisis and I thought it was a dead-end. The only possible honest solution I saw was to accept the idea that my painting came to an end and that I had to live on engaging in something different.

So, I gave up, refused to paint for a while. This refusal resulted in maturation of something completely new. At first it didn’t have either name or form. Ironically, a little later it turned out to be painting. But it was a new way, not mentioning it was a new style.

It was not about inventing or interpreting. The images were not created or re-created. They were coming by themselves, urging embodiment of maximum precision. The only possible thing to do was to let them be.

It’s something alike meditation, the concept of non-action. It includes avoiding interference. It doesn’t imply immobility. It means rejection (becoming empty) of ambition, desire, personal motives, and in general, the identity concept and action as an effort. They say, only an empty flute can produce a sound. Thus, without an effort or will any action can take place naturally.

So to say, it was my creative birth. It happened in 1988, April, 30th. That was when the first painting in what now I call my style appeared.
Here’s my year-by-year bio →