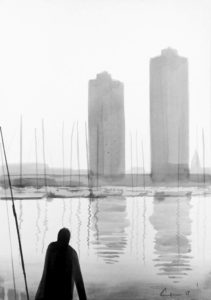 Picture on the left was prepared to the art contest “25 aniversario del Port Olimpic de Barcelona” 2017, it is called Dawn in the Port.
Media is indian ink on canvas, size is 60 x 40 cm.

The pictures below are the part of my project Zooming (Espronceda Centre for Art and Culture, Barcelona 2016).
In this project the exposition consisted of number of graphic works where each of them was presented in several sizes. Small pictures, increased in size demanded new media. And there were some technical points. So white gouache and indian ink on dark paper where substituted by white and black acrylic on dark canvas. Big white canvases were painted with black enamel instead of indian ink on white paper.

This series of work made with white enamel on roofing felt where prepared for exhibition Labyrinth in Artplay, Moscow 2013. Later they become part of the project Zooming in Espronceda Centre for Art and Culture, Barcelona 2016. 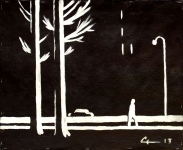