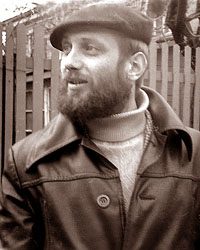 1958: born in Budapest, Hungary, in army officer’s family. Half a year later we returned to Moscow, Russia (than Soviet Union).

1985: started to participate in art exhibitions.

1985: got а job at the Drivers Cultural Center as Head of Drawing Department. I was supposed to cultivate love for art in the hearts of Road Technical School students. However, they proved to be immune to it, and in 1986 I found a child’s club in Baumanskiy district where a drawing teacher was required and where I still teach kids & grown-ups drawing and painting.

1989 – 1990: worked as a teacher of clastic anatomy at School-Studio of Moscow Art Theatre, Stage Costume Department.

1991: became member of the International Association of Artists and Critics.

1994: got an award of the All-Russia Exhibition Center for teaching children (Golden Medal).

2006: my biography was published in the encyclopedia ‘Who is Who in Russia’.