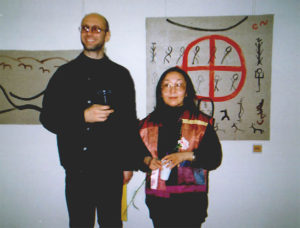 In this February is 20th aniversary of my and Irina Baldano’s project Two Faces Of Buddhistic Moscow. It was exhibited twice: in Moscow and in Budapest.

1997 was year of our fruitful collaboration.  I was impressed by plastic of Irina’s paintings from first sight. In her work was present archaism, but archaism natural and vivid. After our first project, inspired by Irina’s art, I created the clothing collection Mongolia. Irina helped me making trimming with cord and applications for caps. When the collection was ready, fashion-show has been included in the program of the festival  La Nouvelle Asie in the Tretiy Put (Third Way) club in Moscow. Irina did big part of organizing work for this festival and was one of the participants.

Year 31st from century beginning
I did return, not – must be read: by force
I was returned to buddhistic Moscow.
O. Mandelshtam

In O. Mandelstam’s poetry it is not the only mentioning of Moscow as a buddhistic city. It is at least exotic combination. How many buddhists could you see in Moscow in 1931, to describe the city as a buddhistic? Reasonably thinking, this figure of speech was an indirect association.It could be that it was outcome from hygienically clean-shaven heads of the soviet clerks. Perhaps, there has been a subconscious correlation between atheist state and non-theistic religion. But, even if “buddhistic Moscow” is accidental poetic figure of speech, you can find out of this accident inherent regularity.
Atheist march of the Soviet rule was very successful. But success in eradication of traditional religions, leading at first to the spiritual vacuum, later on produced a legitimate need to fill the vacuum. Lack of a traditional religious upbringing led to a critically conscious choice of religion. Some people came to the Buddhism. Thus, interest in Buddhism today is partly the offspring of “buddhistic Moscow” of 30th years. 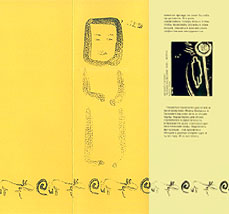 History of Buddhism counts two thousand five hundred years. This is history of both religion and art. The art is constantly evolving. This is due to changes in social consciousness and in the outside world. The development of the arts serves to maintain the quality of the perception correlating permanent changes in the perceived environment and perception of an individual.
Buddhist art (in the broadest sense) is not less various than modern art in general. Sometimes it seems to be contradictory.
In ancient Chinese philosophy and metaphysics we can find concepts of Yin and Yang which describe two primal opposing but complementary principles. Yin and Yang embody such contradictory qualities as female and male, soft and firm, etc. But their complementary action produces life itself.
In the exhibition Two Faces Of Buddhistic Moscow we present to the viewer two very different artists who nevertheless organically complement each other.

For Irina Baldano Buddhist tradition is the natural environment. At the heart of her art is re-shaping of archaic material, understood by her as homesick return to her childhood, held in Ulan-Ude. Memories of this lost paradise, suppressed by everyday life, again alarmed and tried to get out and find their birth. After the naive applique, embroidery followed performances. In the performances is present a large proportion of self-irony about she’s own identity, aboriginehood, playing archaic.
Irina said: “If you scratch below, my art is a product of sublimation of infantile. All my childhood fears and complexes of a girl from small town, who does not become adult women, are pulled out to light. My psychological problems, problems of a modern intellectual women are displayed in this form: play, masking. Mask for me means an exposure of an intimate but hiding secret. I see a mask not like fraud and cheating, following a European cultural tradition, but like displaying sacral. Top, not the bottom, the sky, not the earth. And this way I belong to my culture.”

According to Buddhist tradition spiritual path is the process of overcoming our mistakes and achieving the awakened state of consciousness. The method to achieve this state given by Buddha is meditation. He found that to get the result from the effort is impossible. Only when in the effort were occurred breaks, insights were coming. In Buddhism, meditation means, “effortlessly remaining in what is.” Thus, the practice of meditation includes the ability “not to interfere”.
For Evgeniy Stasenko painting become meditation. After years of ambitious assertion himself as a painter, he renounced his ideas what painting is, renounced his claims to be the creator and author. And then he discovered himself as a tool by which there were things appearing, which he could not even imagine in previous times.
His role from then was only to allow these things to happen, be the most effective tool.

Despite the many differences in the works of Irina Baldano and Evgeniy Stasenko they have some similar. Both of them have the desire for laconic brevity, there are even matching rhythmical features. To put it figuratively, these artists walked around the different sides of the same hill.
And they met.