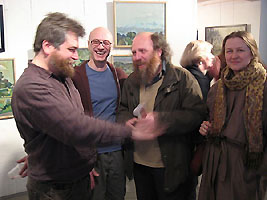 Now, looking back on twenty years ago, I feel myself like a mammoth, which inadvertently wasn’t died out. Passed even not the era – several eras, with their signs, with people who either have disappeared, or have changed.

From 1988 I recollect pies with raisins produced by co-operative company «Gourmet» at Kurskiy station, co-operative stands, where it was possible to buy a repainted Soviet shirt with a fake logo of Philip Morris or Amaretto di Sarono put on it.
Western goods have not yet appeared, but it was evident desire to them. Cooperators came to the unthinkable: they sewed shoes! Most of these shoes were something like slippers decorated with a leather fringe on top.

It was a time of flourishing artistic, poetic and musical life on the Arbat street. I myself was earning money drawing portraits there.
And while I labored over the face of another victim, next to me thundered some «actual» and «socially critical» poet: «We saw honestly and straight both the sides of barricades: one side Ivanov and Gdlyan, on the other – Gorbachev and Lukyanov and obedient to them Party apparatus!». Who now remembers Telman Gdlyan? Foreigners walked on Arbat quite easily, and the U.S. Dollars were becoming more and more part of the turnover, the artisans from Arbat were gladly taking them, though still with precautions. 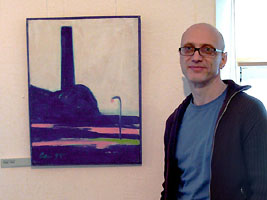 In 1988, I went the first time with my friends to Koktebel. There, in the evenings, I drew portraits on the embankment near ‘Pisdom’ (writer’s House), that allowed not to deny the little pleasures of life in the day and close to the night. The little pleasures of life were located in the coffee house (coffee on the sand!), in the tea house near to the ‘Pisdom’, in the Garadah restaurant and several other places of the communal worship.
The first visit to Voloshin’s home, march to the Tikhaya bay ford under rocks, and the sun and sea … Almost every night took place somebody’s birthday, celebrated in the courtyard of the host’s house (the big boarding houses we didn’t endure – just the private sector). Songs with a guitar, drinking a toasts to the most beautiful suburb of Moscow – Koktebel…

And in Moscow began to move art commerce. I sold the bulk of seven or eight paintings to the one gallery owner, and it was money, which I hadn’t keep in the hands before. There were a cheerful fantasies about success. I remember, we with friends were even going to open art shop of our own! Scheme foiled by prosaic reason: one of us all could count.