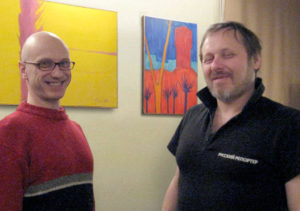 Recently I participated in exhibition Three Muses of Russian Painter: God, Women, Wine in Gallery on Vspolny, and one of organisers and exhibitors was Semen Peterson. We participated in numerouse collective exhibitions together. And there was significant for me individual exhibition with Semen.

Eight years ago (3.07.2003 – 11.10.2003) in the gallery On Krutitcy took place my and Peterson’s individual exhibition named Parallel Worlds. We cooperated with gallery On Krutitcy, where Semen was cofounder and gallery even was named after him in the beginning, until it was destroyed by fire in may 2005. Two of mine paintings were covered with soot severely, so they actually turned into garbage. Others suffered less and I was able to restore them. But most of Semen’s pictures where burned complitely. Unwillingly he was facing oportunity to start new page in his painter career.

Below is text from the booklet written to the Parallel Worlds exhibition by our dear galerist and friend Elena Didyk and little addendum written by her too. 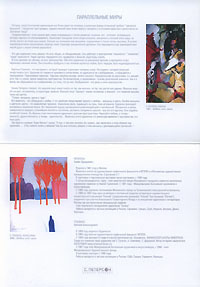 These are two very different artists. But there is something general that connects them. They work in space of symbols, codes of reality. Their pictures transmit an essence of the phenomenon, hieroglyphs of the senses. These pictures are lacking in third dimension, but there is a space.
Both artists not entertain audiences, but force spectator to keen experiencing of life events. They can awaken in us a desire to learn to love and be creative, be unique.

Semen Peterson said that the male face must be painted not as women’s, not as a flower or a tree. The male face is not the color, not paintings, or sculpture, or drawing. The male face “is made” by man himself. On the other hand the female face is higher creations, as well as flower. “Only the women, flowers and mountains.” Referring to love. What mostly represents love – women and flowers. Poetic painting. Charm of the simplicity and meaning. Louis Aragon in the novel “Henri Matisse” wrote: “And everything what I could say, contains already this cloud over the strait. And do you like to read in the clouds? How much would I like to see a women with spreading out hair in it…”

Stasenko’s pictures are the tools that make possible to feel the essence. He is not trying to make an impressions, he is not appealing to the imagination, but to experience.
Experience is primordial. Pictures are like icons, nothing superfluous. Ornamentation is inadmissible, because it prevents to get the heart. As in an icon, symbolism of space is important. Not impressions but experience is the basis of religious paintings. As in an icon, we do not appeal to the image, but to something beyond the surface. Image is the door to another space.

Today, when technogenic civilization increasingly presses on a person, and market forms of relations require “to become a function,” a “product” for sale, artistic language can return a person to the sources of unity and integrity from the state of “thing”.
Contact with this language gives new information and impetus to development, it is a source of information that is drawn from the unconscious. There takes place a shifting of the consciousness base point, connected with the logic of this world, to the logic of one of the layers of other worlds. First we understand the world with emotions, sensations and only then with thoughts. At the heart of ideological philosophical structures are emotional-spiritual structures. They are born when our soul interacts with other layers of reality.