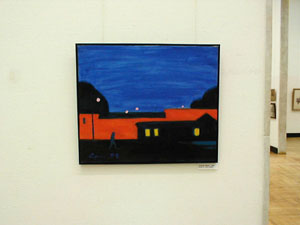 Ten years ago (20.03.2001 – 8.04.2001) in the Central House of Artists in Moscow took place my individual exhibition named To Allow It To Be… My personal logo appeared first time on the booklet for this exhibition.

It was big step for me. And I want to thank wonderful people who helped me and have made all this possible. Here is text from booklet prepared to this exhibition.

“Work of art springs up from a natural need of it
and moulds in a form that can organically express its content.”
(From LA NOUVELLE ASIE booklet)

Evgeniy Stasenko’s painting provokes very different (to a total opposite) evaluation. Some say: too gloomy. Others say: what vitality! Others ask: Why so primitive? Fourth ask: what does it mean? Fifth (the vast majority) did not ask and do not talk – they know nothing about the artist Stasenko. 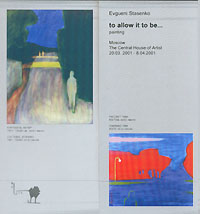 Evgeniy Stasenko – artist for a very small number of viewers, for those who can get from pictures some vibration, resounding with their inner feelings and not ask questions that could not be answered. Art always is beyond words, it is on another side of life, it is the allusion saying that man is more than he uses to imagine. All that can be done to determine paintings such as Evgeniy Stasenko’s was trying to trace its origins.

Earlier creativity Evgeniy quite sincerely worked with nature in a realistic style, being bewitched by mystery of the birth of whole worlds on canvas plane. But then came a threshold of saturation and it turned into a crisis from which there seemed no way out. The situation demanded utmost honesty. And the decision was unequivocal: the painting came to an end, and there was only way to accept that and to live, engaging in something different.
The result of denying to paint was maturation of something new that did not have any name or form at first.
Ironically, after some time, it occurred to be the painting! But the painting very different from previous one. Images were coming by themselves urging embodiment. And embodiment maximum precise. It was out of the question something “to invent”, “to make a creative interpretation” there only possibility was to help to be an image in its own way.
There is a similarity in the meditation, in the concept of a “non-action”. The meditation includes the ability to “not to interfere”. This implies the rejection of any ambitions, desires, personal motives. Man should be “empty” because, as say, only the empty flute may produce a sound. The meditation does not mean immobility. The main condition is the lack of concept of the identity, or “the acting”. Then, without effort of the will, may happen any action, and that action comes from emptiness.